New Gate
Located on the northwestern perimeter of the walled city, its Hebrew name is Sha’ar Hadash and its Arabic name is Bab el Jedid, both meaning “new.” The gate was opened in 1887 by the Turkish sultan Abed el Hamid after intense lobbying by Christians who had settled outside the walled city and wanted direct access to the Christian Quarter and the Church of the Holy Sepulcher.

Herod’s Gate
Alternative names are: Flower Gate or Sheep Gate. In Arabic, the gate was called Bab es Sahirah, Cemetery Gate, because outside the gate and up the hill is a cemetery. The residents of the northeast corner of the Old City substituted one letter and they changed the name of the gate to Bab el Zahirah meaning Flowers Gate; they were not interested in receiving mail addressed to the “Cemetery Neighbourhood”!  In Hebrew the gate is called Sha’ar Perachim, Flowers Gate. There is another name, Sha’ar Hordus which means Herod’s Gate. This part of the city was not enclosed by a wall during the reign of Herod the Great. Roman Catholic tradition has it that the home of Herod Antipas was in the area of the Flagellation Convent, near this gate. Its location is to the east of northern side, and the year of construction is unknown. 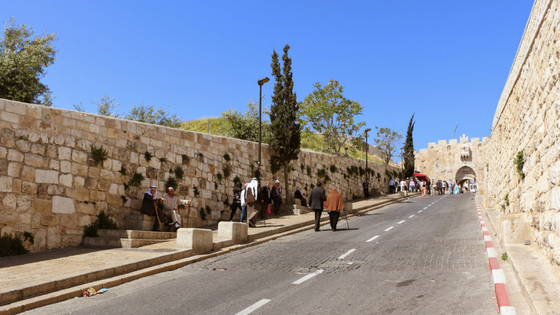 Alternative names are: Gate of Yehoshafat, St. Stephen’s Gate, and Gate of the Tribes. In Hebrew it is called Sha’ar Ha-Arayot in honor of the decorations above the gate. In Arabic the gate is called Bab el Asbat, the Gate of the Tribes, as legend has it that the tribes of Israel entered the Old City through this gate. Its location is in the north of the eastern side of the Old City, and its year of construction was 1538-39. Tradition has it that Stephen, the first Christian martyr, was stoned in the Kidron Valley below this Gate.

Dung Gate
In Hebrew, the Dung Gate it is called Sha’ar Ha’ashpot because from inside the city, to reach the gate, one would walk downhill past the place where Old City residents, over the centuries, would throw their garbage. Paradoxically, the Dung Gate is today one of the cleanest areas in the Old City. In Arabic the gate is called Bab el Mugrabi meaning the gate of the North Africans. During the Turkish times there was a neighborhood inside the Dung Gate, close to the Western Wall called the Mugrabi neighborhood whose residents had originated from North Africa. When you enter the Old City through the Dung Gate, you’ll walk up directly through the security outpost to the Western (“Wailing”) Wall plaza. Its location is to the east of the southern side, constructed in 1538-40. An alternative name for the Dung Gate is the Gate of Silwan, as the neighborhood of Silwan is right outside this Gate.

Zion Gate
An alternative name for Zion Gate is the Gate to the Jewish Quarter as its location is in the middle of the southern side of the Old City. It was constructed in the year 1540. The gate was built for Suleiman the Magnificent. In Hebrew it is called Sha’ar Tziyon and in Arabic, Bab a-Nabi Daud (Gate of the Prophet David) as the Tomb of King David, on adjacent Mount Zion, is only a few steps away. In the 19th century, an area close to the gate was the gathering place of lepers. Zion Gate leads directly to the Armenian and Jewish quarters. 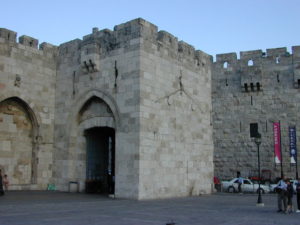 Located in the middle of the western side of the Old City, Jaffa Gate was constructed in 1530-40. This was a destination of Jewish and Christian pilgrims who had disembarked at the Jaffa port. In Hebrew the gate is translated Sha’ar Yafo. Yafo is the name for Jaffa in the Hebrew Bible, mentioned for example, in the Book of Jonah. In Arabic the gate is called Bab el Khalil which means Hebron Gate (Khalil means “friend”  and the friend in this case is Abraham. The tradition that Abraham was buried in Hebron led to the city of Hebron being called al Khalil in Arabic). Until the end of the 19th century, Jaffa Gate was locked every night to keep out marauders, hyenas, jackals and “dragons”. The dragons may have been imaginary, but the others were real! Travelers arriving at dusk had to carry lanterns so they could be identified and admitted into the city. Latecomers had to sleep outside the walls and wait until dawn when Jaffa Gate opened.