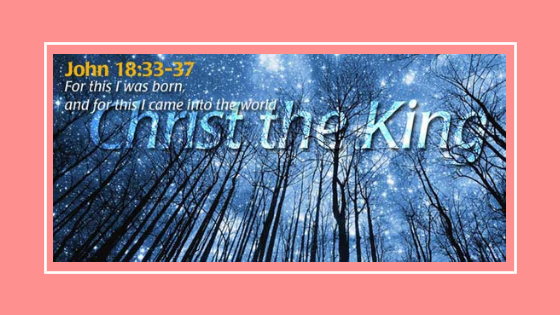 REFLECTIONS ON THE READINGS FOR THE FEAST OF CHRIST THE KING

Each of the readings chosen for today originated in a situation of suffering.  The first and second readings are examples from the Hebrew Scriptures and the New Testament of ‘apocalyptic’ literature that emerged in times of persecution.  Like the prophets, the authors point the reader to God who guides history towards the establishment of God’s universal rule, and gives assurance of final victory to those who remain faithful to the Eternal One.

The Book of Daniel was written around 167 BCE to inspire courage and perseverance in the Jewish people who, because of their adherence to the God of the Covenant, were violently oppressed by Antiochus IV, who tried to destroy Judaism.  Chapter 7 describes a series of visions in which four successive world powers (Babylon, Medes, Persians and Greeks) are represented as beasts which will be destroyed.  The vision we read today contrasts the beasts with one like a son of man – that is, a human being – who will receive a universal kingdom which will be everlasting.  This son of man is identified with those who are  righteous, and the kingdom which they will inherit is the final goal of all their suffering.

The image of God as king is found in early biblical texts.  Indeed, in ancient Israel the institution of the monarchy was opposed because it seemed like a denial of God’s kingship.  The celebration of God as King is a prominent theme of the Jewish New Year liturgy during which our psalm today, Psalm 92, is sung.  The faith and hope of the believer is expressed in the words of Zechariah 14:9:  “The Lord shall be king over all the earth:  in that day the Lord shall be one and God’s name one.”

The Apocalypse/Book of Revelation from which the second reading is taken, was written to encourage Christians in a time of great distress when persecution was expected in Asia Minor.  The titles given to Christ link him both with the Father and with believers on earth.  The reference to “one coming on the clouds” is influenced by our first reading from Daniel and the twofold “Amen” suggests that the text was used in the liturgy of the early Church.  The reading ends with a proclamation of the sovereignty of God who is the beginning and the end of all creation.

In contrast to the other three gospels, John extends the examination of Jesus by Pilate to include this private conversation inside the Praetorium, where there were no witnesses.  Through it, John elaborates the meaning of the proclamation of Jesus as king – which is also present in the other gospels.    It becomes clear that political kingship – which is the only one Pilate understands – is not in question here.  Jesus speaks of his kingdom rather than of himself as king (the Jerusalem Bible translation is misleading here).  Although this is not “of this world”, it does make demands on men and women in their lives on earth, demands which are spelt out in the answer to Pilate’s second question.  Only those who “hear” can understand.  Pilate is not among these.

At the end of the Church’s year, it is fitting that our attention is focussed on what lies at the heart of our lives and will be our final destiny –  the vision of God and eternal happiness.  To acknowledge the sovereignty of God should make a difference to the way we live.  The feast of Christ the King was instigated by Pope Pius XI to emphasize the importance of social action.  The criterion of our relationship with God will always be loving service of our neighbour.  It is clear in the gospels that Jesus, far from assuming the title of king, preferred to call himself “servant”.  He told the apostles that in order to be his disciples, they too had to be servants of each other.

This week’s Sunday Readings Commentary was prepared by

PLEASE NOTE: The weekly Gospel commentaries represent the research and creative thought of their authors, and are meant to stimulate deeper thinking about the meaning of the Sunday Scriptures. While they draw upon the study methods and sources employed by the Bat Kol Institute, the views and conclusions expressed in these commentaries are solely those of their authors, and do not necessarily represent the views of Bat Kol.  Questions, comments and feedback are always welcome.